Download e-book A Certain Curve of Horn: The Hundred-Year Quest for the Giant Sable Antelope of Angola 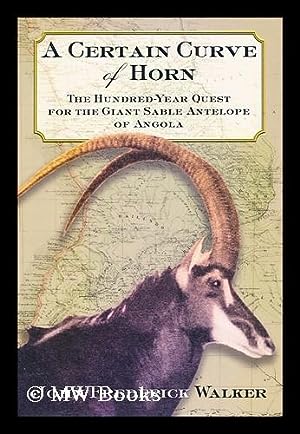 
Maps of Angola on endpapers Includes bibliographical references and index "In A Certain Curve of Horn, veteran journalist John Frederick Walker tells the story of the giant sable, weaving an enthralling epic of exploration and adventure, politics and war, bringing to life the brutal realities of today's Africa and the bitter choices of conflicting conservation strategies.

Walker takes the reader on a quest from the giant sable's place in the hunting myths of the Songo and Lwimbi peoples, through the coming of Portuguese colonization in the fifteenth century, the animal's discovery by British railway engineer H.

Varian in , the horrific six-nation conflict that followed Angolan independence to the current controversial effort to restock a vast wildlife park in coastal Angola that may become the noble antelope's new home Along the way, Walker shares the stories of the adventurers, scientists, and warriors who have come under the thrall of the beast, and how their actions shaped the fate of the giant sable antelope - and the war-torn nation that is its only home.

There are no reviews yet. Be the first one to write a review.